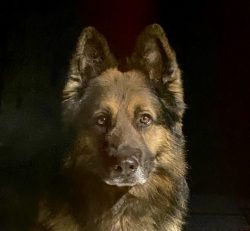 A-1 stamped for hips and elbows

Rohan is the puppy we kept from Jake (International Champion Jake vom Kanas CD, BH, RN, JJ-N).  He is everything we had hoped for both in temperament and in nobility. Like many of Jake’s offspring, it was as if Rohan was born knowing how to heel by my side.   His pedigree sports world famous working dogs such as Alk Vom Ostenburg Quell, Lord Gleisdreieck, and Ellute von der Mohnwiese.