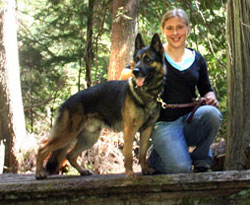 Out of the line of Lord Gleisdreieck, East German, and Quitta, Czech, Jake has a magnificent bearing. A guardian of our children, Jake belongs to our youngest daughter, Hannah.  As a ten year old, she started working him in obedience in 4H. In 2006, they achieved blue ribbons in both Obedience and Agility. Then in 2007, they took the Grand Championship in Obedience in 4H and then at the AKC trial in Spokane WA Jake earned the distinction of Higheset Scoring German Shepherd. In 2008, they completed Jake’s AKC CD Title. The next year, 2009, they tried some new venues, Agility and Conformation, with Hannah and Jake earning his Jumpers Agility Title in ASCA and his International Championship for conformation. 2011, our daughter took Jake to the trials one more time to finish his Rally Title. They also earned a leg towards his CDX,  an advanced title requiring retrieving over the high jump, a down on recall, the broad jump, and out of sight long down and sit stays.   Jake is always by Hannah’s side, making sure everything is okay, a constant friend and protector.