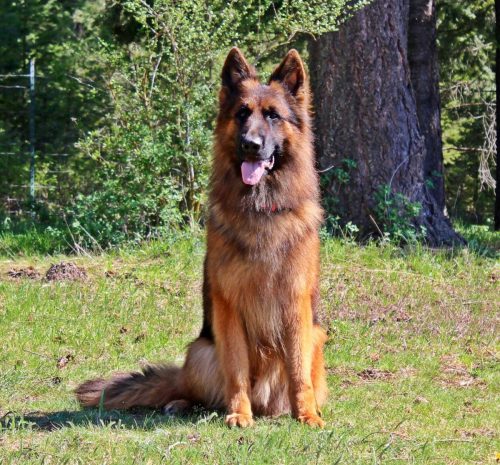 A-1 Stamp for Hips and Elbows

When Keeper was born, he stood out immediately with his bold color and robust head.  As he grew, though we hadn’t been planning to keep a puppy, we could see that we would be foolish to let him go.  His name was a given, “He’s a keeper.”  His breeding represents many of the best of our dogs:  his sire is our magnificent stud, International Champion Cardinal vom Sparthof CD RA, Therapy Dog, and  his dam is our precious own, Kindra vom Haus Kohl BH, CD, RA whose pedigree includes both International Champion Jake vom Kanas, JJ-N, BH, CD, RN and, V Imo vom Werraufer SCH III, FH whom we called “Strongheart”.  These are bloodlines with dogs, we know and love.

As we took him through the numerous health clearances we require for our breeding program, we had to smile as he passed each one.  When his hips were x-rayed, our vet exclaimed, “It would be difficult to improve these.  He’s a Keeper!”

For performance, he soared through the Rally Novice class, earning high scores throughout.  It would seem that he has the obedience performance proclivity that we have seen in Sunny, also out of Jake‘s line.  Without a doubt, he has inherited the good looks of his sire, Cardinal.  Keeper’s structure with the beautiful flowing gait of the German Shepherd, straight backed, large, deep red, robust, and thoroughly outgoing–he’s a Keeper!