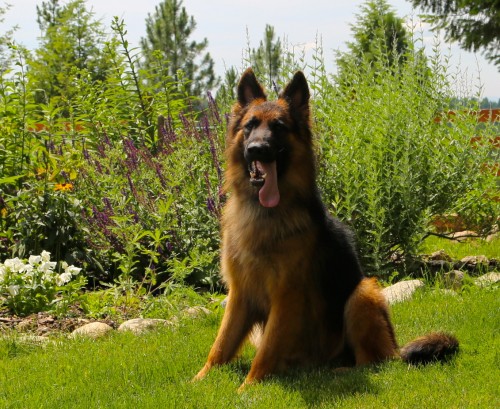 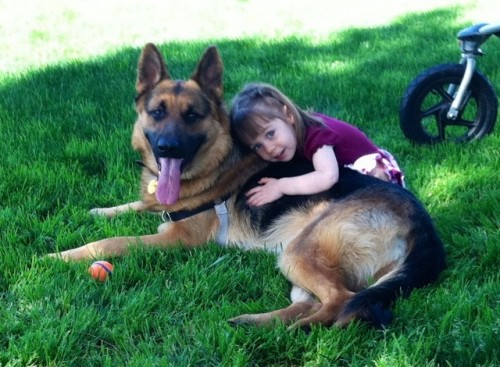 From Dave and Shirley, 2015, as they write about Keyto,

“Now for an update on KeyTo’s doings. All I can say is GREAT!

We just recently got back from Arizona, visiting our oldest son and his wife, our 2yr. granddaughter, and our new grandson. Our visit for 8 days was great! KeyTo is a star! And the best baby sitter you could ever ask for! He is a love and gets along with everyone, including Maggie who is half jack russell, half dachshund, who is rather bossy. Our whole trip was a pleasure because of KeyTo’s personality.

Now, I must say a word about his handsome beauty and grace. He is gorgeous!
You should be getting a lot of referrals from us. Coat color is red and Black with deep tan on legs.
Has the smoothest gait of all and when feeling sassy, has that prance we so love.
He is very intelligent and full of mischief teasing and a fast learner. He is strong and sure footed.

And we love him deeply, He is our, “KeyTo The Heart of Hope.” 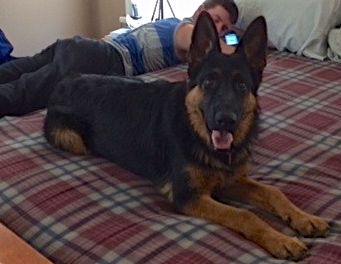 According to Del, who has had several german Shepherds, this is the best dog he could imagine. 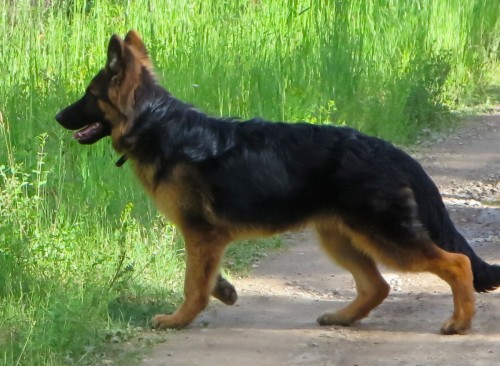 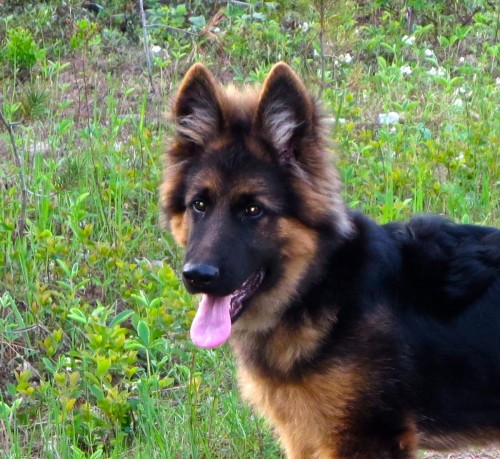 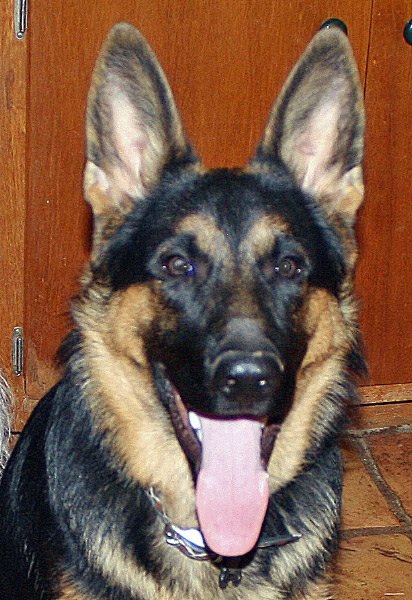 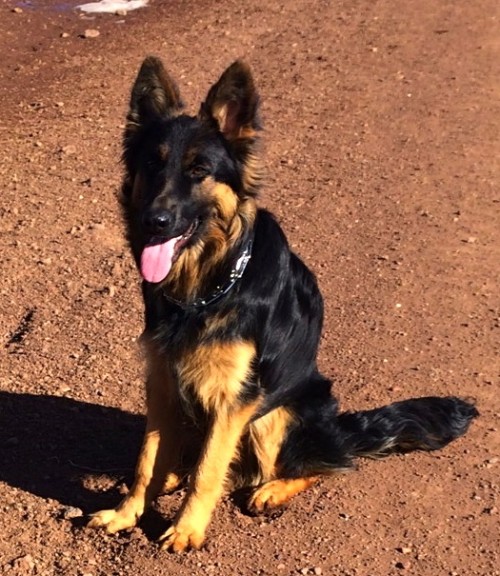 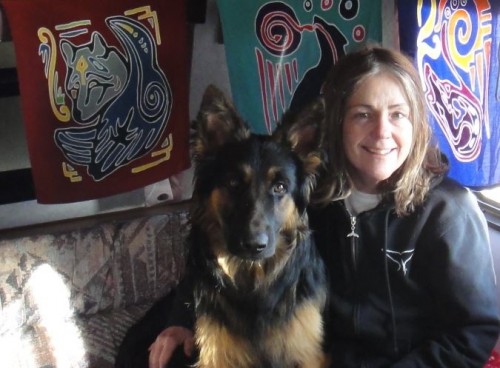 Randy and Deborah write, “He has some very intense reactions to what he perceives humans in distress.  We had the issue with Randy in the water and him jumping in to “save” him and being quite hysterical.   Last night we were watching a movie and in it someone was struggling very hard to breath and Solomon went bonkers again, trying to find the person in the TV and being quite upset about it all. He normally has zero interest in the TV unless a dog barks and then not much of an interest, he just hears it and looks.  But he went up to the TV was very agitated and tried very hard to “find” the person.    What do you think?

“We went on a weeks surfing trip in early November and we boarded him at my favorite place.  They play and walk their quests daily — good 3-4 mile walks in the woods and 1 hour play time…doggie spa for sure…anyway the grandson (10 yr old boy) of the owner had a puppy who died and was having a very difficult time, so they brought Solomon in from the kennels to stay with the boy and it helped him through the bad part of it.  They said Solomon was a very special dog and seemed to understand the need to be quiet, close and gently playful.  Thought it unusual for such a young dog.”

“I have to say of all the puppies I’ve raised he’s the calmest and least destructive. He is also our alarm clock, very accurate!…You have some mighty fine lines of GSD going….just want to share what a wonder and pleasure it is to have Solomon in our lives. “ 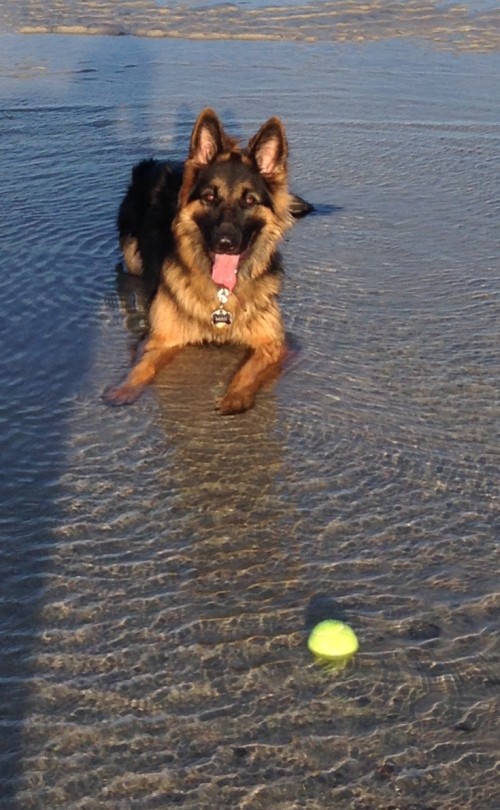 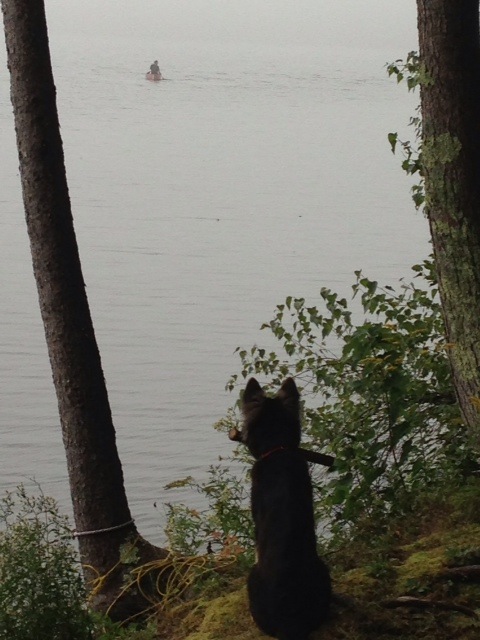 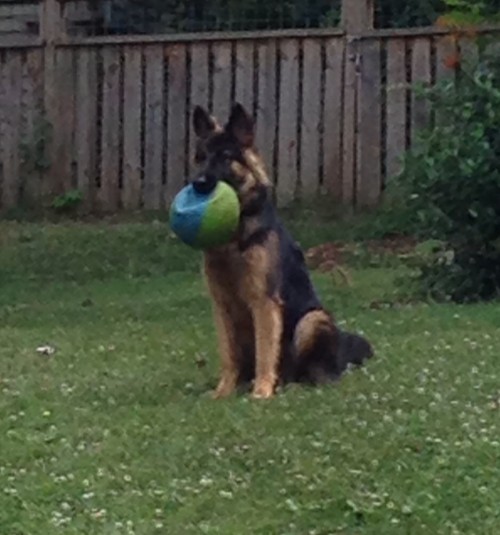 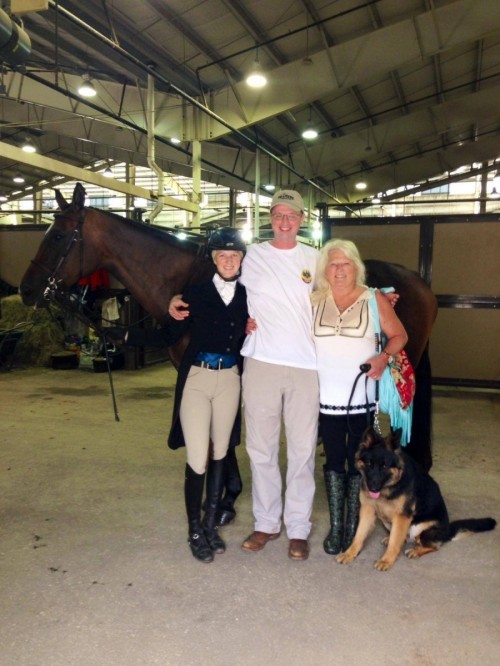 Kim has said that Kai is a very special gift to her life, from her loving and thoughtful temperament, to her traffic stopping beauty, Kai is the dog of her dreams.  (Kim was formally a breeder and conformation competitor and she knows what she is talking about!). 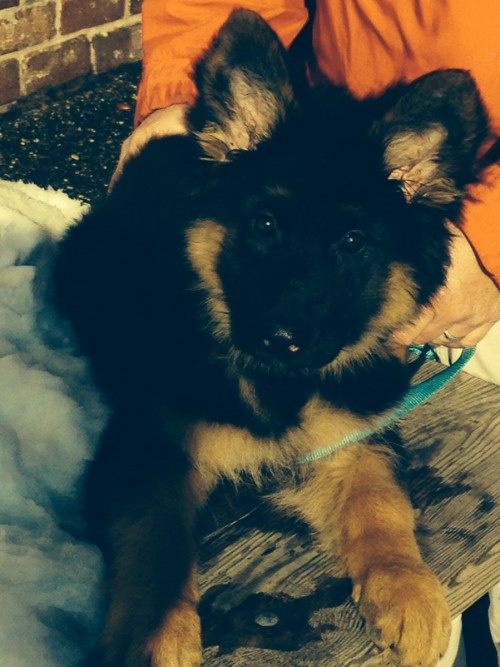 We are just loving Saba! She is such a good girl and is so funny.

I wanted to let you know what the trainer said as soon as she saw Saba this past Sunday in our “Puppy Kindergarten ” class. She exclaimed “she is really put together well” and praised the breeding program. When I asked her specifically what she meant, she went on to describe her proportions, her back etc. Thank you again for the care you take. I receive so many compliments about her!

Saba is such an awesome dog and such a clown . The other day while at her training class, the trainer took her outside on a break – Saba climbed up a snow bank, put her face in the snow. Then She turned on her back and slid down like a sea lion : she had so much fun she did it again! What a shame the trainer did not have her camera!! People stop me often asking where I got her so I point them to you website.