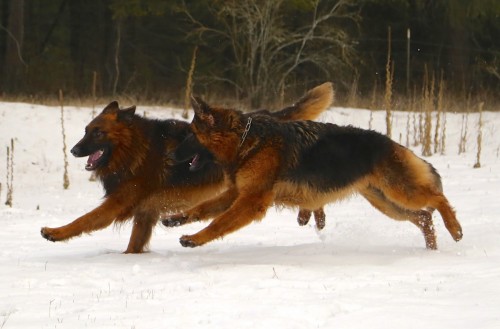 When Rittmeister von Stephanitz first brought attention to the German Shepherd Dog as a recognized breed, there were two varieties of coat in the dogs, long coat and the short stock coat most often seen today. Stephanitz, recognizing the incredible versatility of this dog, in 1899, established the SV (Schaferhund-Verein). This breed club established rules for the German Shepherd Dog including tests for working ability (schutzhund) and breed conformation. Unfortunately, Stephanitz believed that the long coat pups lacked undercoat and therefore would not have the weather resistant versatility he desired in the breed. However, because of their outstanding abilities, long coats were also admitted into the show ring, but they were given a lower rating for the coat. Coat length was not originally a disqualification. Over time, the FCI and the VDH, naturally began to view long coat as non standard and therefore eventually rejected, from competition in conformation, this type of coat. Until recently that is. As of 2010, the SV standard in Germany for the German Shepherd Dog will be changed to read: “The German Shepherd Dog is bred in the hair varieties Stock Hair and Longstock Hair, both with undercoat.” This is an exciting development for long coated fanciers.

Throughout the years, even during the time when the long coated shepherd was not permitted in the show ring, long coat pups continued in the gene pool of the German Shepherd Dog. They are admired for their beauty, working ability, and their outstanding balanced and trainable temperament. It is because of these special qualities, that many people, especially those who have owned one and come to cherish the pleasant disposition that generally follows the long coats, have worked to have the German Shepherd Breed organizations once again recognize the different varieties of coat.

Horst Hegewalk-Kawich has written a book on longhairs, called Ratgeber Langhaar-Schaferhund . This book details the unswerving commitment and love that breeders of long haired shepherds have for these magnificent animals.

Talk to anyone who has owned a long-coated shepherd and they will not only describe in glowing terms the dog’s beauty, but they will undoubtedly tell you about a dog unmatched by others in terms of loyalty, trainability, and unbeatable temperament.