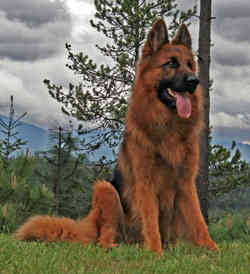 We are very privileged to introduce Cardinal to our breeding program.  He was imported from the Ukraine two years ago by our friend, Julie Wible.   Thank you, Julie!

Cardinal has moved in as if he always lived here.  He is by my side in the house, lying by my feet as I type.  Outside, he is a joy, playing fetch in our yard, or in town, parading like a maned lion.  He is definitely an attention grabber as people are drawn to his beauty and stately manner.

July, 2014, Cardinal finished his third legs in both Rally Advanced and Novice B, giving him two more titles, RA and CD.

November 2014, Cardinal has been evaluated and approved to be a Therapy Dog with Therapy Pets Unlimited.

August 2015, Cardinal has earned his Therapy Dog Novice Title with the AKC as well as his Canine Good Citizen AKC title.