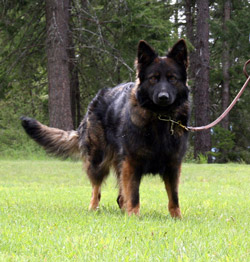 cared for and trained by our daughter, Hannah

Hannah writes: Chinook is an awesome dog. She is being trained in Agility and literally zooms through the course. Chinook has a friendly, willing to please attitude that is just endearing. One of my favorite things about Chinook though is that no matter what she is doing when I call her name she will come. It does not matter if she is playing with other dogs or just running free. She will still come. Even if I don’t call she will come over from time to time just to check up on me. She is a fabulous dog and a joy to train.

One judge commented that it is so nice to see German Shepherds with the correct structure for jumping.