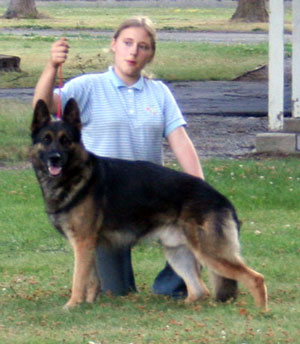 The German Shepherd Dog of today continues to be a superlative companion dog and is the working dog of choice by many agencies. In North America the German Shepherd Dog is, by litter and individual dog registrations, one of the most popular and numerous breeds. They are suitable for herding, police work, guiding the visual impaired, schutzhund, ring sport, search and rescue, drug and bom detection and tracking to name a few. The German Shepherd Dog is also a natural guard dog, being territorial and protective. Throughout the world are many organizations which promote the breed and host associated activities. Included is the Sieger show each yearin Germany which is the largest show held for any breed in the world.

The Sieger show attracts hundreds of thousands of people to witness this spectacle involving an entry of dogs in excess of one thousand. In North America, similar systems exist although on a smaller scale. Many conformation shows are held each year as well as obedience trials, tracking trials, temperament tests, schutzhund trials, herding trials, agility events, french ring trials, police dog trials, and more. The German Shepherd male stands 24 to 26 inches and weighs 80 to 95 pounds while the female stands 22 to 24 inches and weighs 70 to 80 pounds. The breed has a medium length, straight outer coat. Accepted colors are sable, black and tan, bi-colour and all-black. It is important to know that the German Shepherd Dog is:

They are wonderful with children that they are raised with but should be supervised when in the presence of other children. Their natural protectiveness cause them to bark at anything unfamiliar. The intelligence and confidence of the breed requires that the German Shepherd Dog be properly socialized and trained .  Puppies should be taken to parks, malls 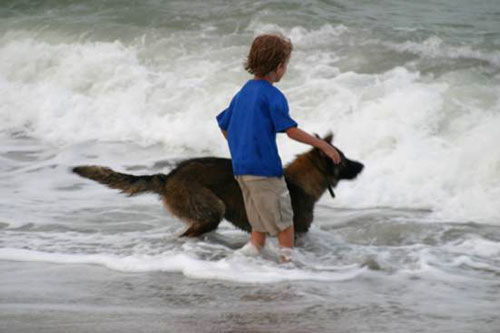 and other strange places for proper exposure to environments other than their own home. Early training is recommended with kindergarten puppy classes a good starting point for pet owners. The German Shepherd Dog embodies intelligence and noble bearing with unlimited potential as a working dog or as a pet. The German Shepherd Dog is the most beloved and trusted of family pets and guardians, and regarded as the world’s best and most versatile working dog, overall, and a favorite of police and sport dog handlers and trainers worldwide. Their special traits include intelligence, loyalty, watchfulness; also physical hardiness, energy and stamina, and of course, their unique beauty. There are many approved colors, such as black and tan, black and red, black and gold, and also many, many varieties of sables and greys, such as the red sable or the rare and exotic black sable.The color of black is approved by all international breed standards, however white is not allowed to be shown in all countries, and white GSDs are not allowed to be bred in most countries. “Blue” or “liver” are dilute colors, and although quite rare, are also forbidden and considered very undesireable. The coat is a “double” coat, that is there is a longer, coarser outer coat, which gives the dog most of its visible color

and coat pattern. The undercoat, which is soft, relatively thick, and shorter than the outer coat, is designed by nature to insulate. Thus the undercoat is fuller in the winter than it is in the summer. It is naturally water-repellant, and works together with the outer coat to dispel rain, snow, dirt, and even heat, and the ample haircoat can even help to repel scratches, cuts and punctures! (Shorter coated dogs are far more likely to suffer lacerations to the skin!) Even when immersed, the inner coat keeps water away from the skin and allows the dog, after shaking himself, to dry quickly. It is no surprise that the German Shepherd Dog is a favorite choice of working dog for those who work in difficult terrain and climate! Long coated dogs do occur, and are favored by a few people who have come to like the bear-like look, but many such dogs have a lack of undercoat, and its’ beneficial insulative properties. The “guard” coat or outer coat is also softer and longer, which allows tangles, and matts to form more easily, and longcoats also tend to pick up lots ofbriars, burrs and brambles and nettles. Despite an outward appearance slightly resembling a wolf, the German Shepherd Dog is a fairly recently developed breed and, contrary to naíve beliefs, it is no more closely related to the wolf than any other breed of dog. The breed is the result of a conscious effort to produce the ideal shepherd, capable of herding and guarding its flocks. Perhaps never in the history of any breed has such concerted effort been put into improving a dog, mostly due to the formation in 1899 of the Verein fur Deutsche Scharferhunde SV, an organization devoted to overseeing the breeding of the German shepherd. Breeders sought to develop not only a herding dog but also one that could excel at jobs requiring courage, athleticism and intelligence. In short order,

the German Shepherd had proved itself a more than capable police dog, and subsequent breeding strove to perfect its abilities as an intelligent and fearless companion and guardian. During World War I, it was the obvious choice for a war sentry. At the same time, the AKC changed the breeds name from German sheepdog to shepherd dog, and Britain changed it to Alsatian wolf dog, both attempts to dissociate the dog from its unpopular German roots. The wolf dog was later dropped as it caused many people to fear the breed. In 1931, the AKC restored the breeds name to German Shepherd Dog. The greatest boon to the shepherd’s popularity came in the form of two dogs, both movie stars: Strongheart and Rin Tin Tin. The German Shepherd held the number-one spot in American popularity for many years. Although presently it has dropped from the top spot, the German Shepherd remains as one of the most versatile dogs ever created, serving as a police dog, war dog, guide dog, search-and-rescue dog, narcotics- or explosives-detecting dog, show dog, guard dog, pet and even shepherd. This breed needs daily mental and physical challenges. It enjoys a good exercise session

as well as learning session. It can live outside in temperate to cool climates, but it is family-oriented and does equally well as a house dog. Its coat needs brushing one or two times weekly. The German Shepherd Dog has an outline of smooth curves on a body that is longer than it is tall. It is strong, agile and substantial. Its gait is exceptionally outreaching and elastic, covering the ground in great strides. It has a double coat, with the outer coat consisting of dense, straight or slightly wavy, harsh, close lying hair of medium length. Among the most intelligent of breeds, the German Shepherd Dog is so intent on its mission, whatever that may be, that it is virtually unsurpassed in working versatility. It is utterly devoted and faithful. Aloof and suspicious toward strangers, it is protective of its home and family. It can be domineering. It can be aggressive toward other dogs, but it is usually good with other pets.