Below is a copy of Rohan’s AKC Pedigree Certificate with his Hip and Elbow Certifications from Germany.  He is rated A-1 for hips, the highest rating, and Normal for Elbows. 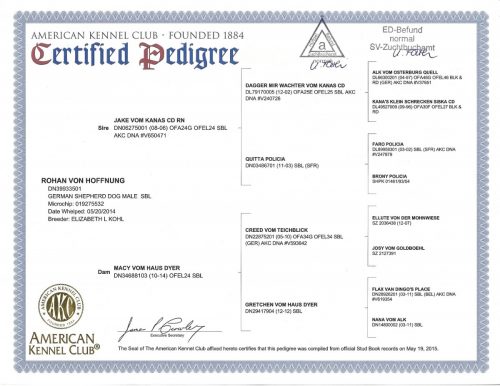 Rohan’s pedigree is filled with great dogs, unfortunately, in an AKC Pedigree, only AKC titles are listed and then only those titles which had been earned by the time the Pedigree was ordered: Rohan, himself, is titled with a Rally Novice Title and is working toward his International Championship.  Rohan’s sire is our own Int’l CH Jake vom Kanas RN, CD, BH, JJ-N.  Both Jake’s parents are titled:  Dagger, Jake’s sire, was a Medical Response Service Dog, who alerted on his owner’s medical needs.  Dagger also earned his CGC, CD, his BH, and his WH (IPO Watchdog Title).  Dagger’s sire is the world reknown Alk Vom Osterburg Quell SCHIII, DPO2, WPO, 3 x USA DPO CH 7’th world.  Of course, Alk’s sire is the even more famous Lord Gleisdreiek (SG Lord vom Gleisdreiek SCHH3, FH3 3x DDR SIEGER, EUROPAMEISTER) of Germany.