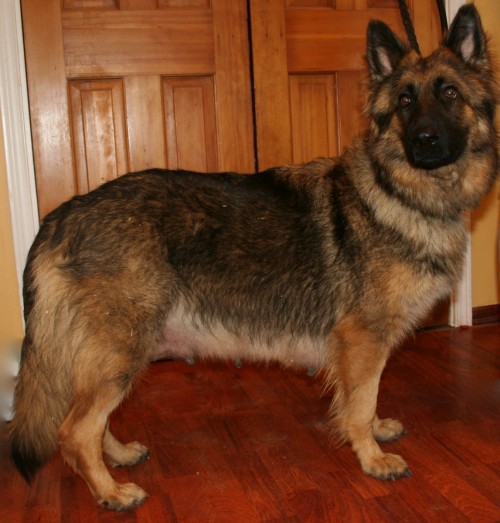 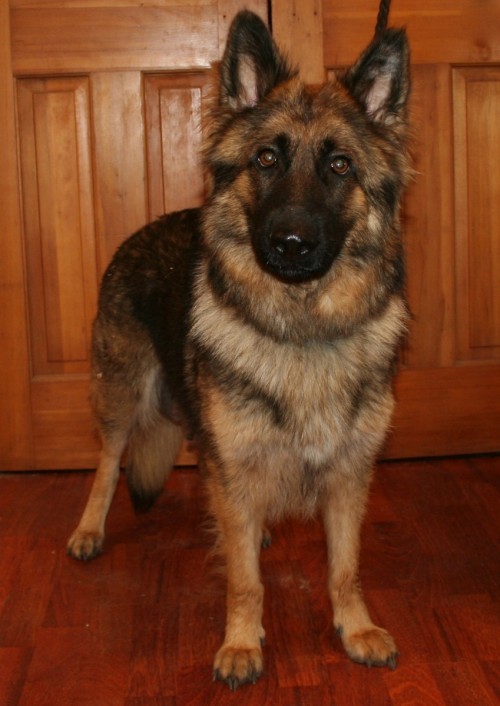 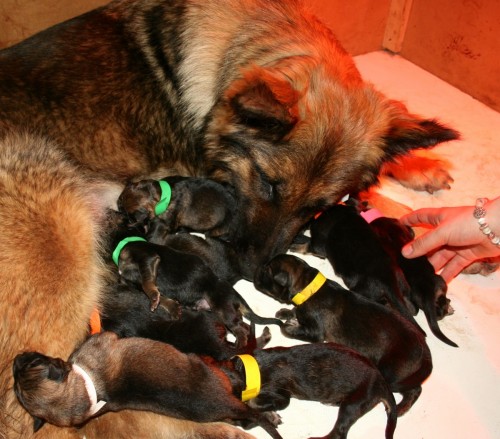 Macy with her rather large litter of newborns, good job Jake and Macy!

Macy vom Haus Dyer is the granddaughter of Ellute von der Mohnwiese SCH III (2 x BSP) FH1.  We are very pleased to introduce her into our breeding program bringing the genetics of her strong German working line pedigree.  She has been started in Protection work which she will continue after her puppies are weaned.  Outgoing, social, happy, an amazing mother dog, Macy is a welcome addition to Candle Hill.

June 17, 2014  Something so cool about Macy is how she is raising her puppies. We have had the entire litter in the large puppy room from the very beginning. They were born in the whelping box and stayed there for the first few weeks, the walls being too high for a puppy, especially an infant puppy, to climb. But starting a few weeks ago, Macy would divide her puppies into different piles, some outside the whelping box, some in, in three or four puppy piles. I tried to stop her one time as I wanted all the puppies to stay together in the whelping box, but she was rather determined. At first I thought it was random, but day after day, watching her, it became clear that the puppies were in very distinct groups, sometimes the smallest ones were all in one pile, as if set apart for a special extra feeding. We began supplementing early given the size of the litter, but even today, on the puppies’ four week birthday, checking on them this morning, there was the littlest puppy, all by herself (Macy having jumped up to greet me) in the whelping box, while all the other puppies were on the outside wandering around. The only way that puppy could have gotten in the box was by Macy carrying her there herself. The whelping box has become Macy’s private resting place with the puppies on the outside and unable to come in. But apparently, not so for the smallest one, because Macy, two days in a row now, has chosen to hop out and carry this little one to be alone with her getting that extra nutrition and mommy time. What a dear mama dog!

The pictures below are from several weeks ago, before we put pine chips on the floors. After all, we didn’t think we would be using the floor for puppies so soon! Some of the puppies are in the whelping box and some in a separate divided area that we built so mama dogs could have space away from their puppies as they get bigger. In other words, these three piles of puppies are in completely different areas of the room, divided by foot high walls that puppies this small cannot climb over. Puppy feeding stations systematically developed by one very smart and intuitive mother dog! 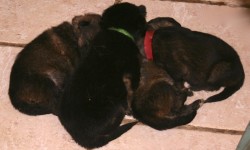 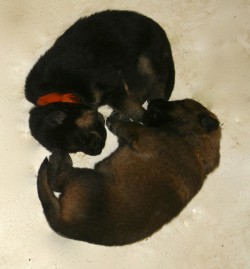 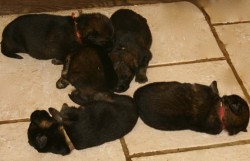