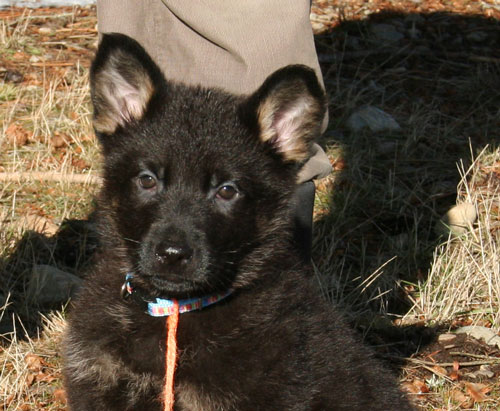 ” I just want you to know that Juneau arrived safely and is adjusting quickly.  He is so cute and focused.  I just love him.  I am trying to follow the advice in “The Art of Raising a Puppy” and hope to have him house trained soon. Thank you again for everything.” Jenna, 2-3-2007 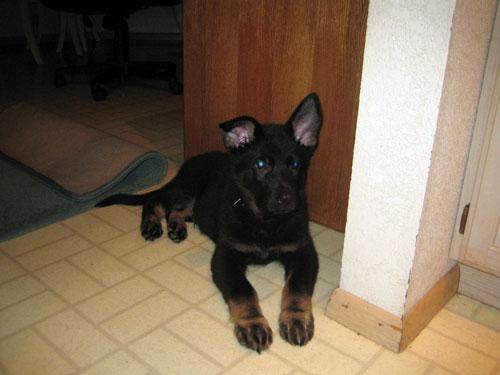 ” The last two nights he has slept all night, except for getting me up twice to go outside. He loves to run, eat and give fantastic kisses. He can handle both flights of stairs to and from our back yard.      He is already acting protective. We were outside in the back last night at about 0330am, when some coyotes started to sound off. It did not bother Baron at all. He just went right up to the fence to see what was up. Absolutely fearless !!  That’s it: fearless, highly intelligent, drop-dead gorgeous, demanding, fun and full of life. That’s our boy.      Bless you for your superb foundational efforts with Baron on our behalf ” Tony, 2-12-07 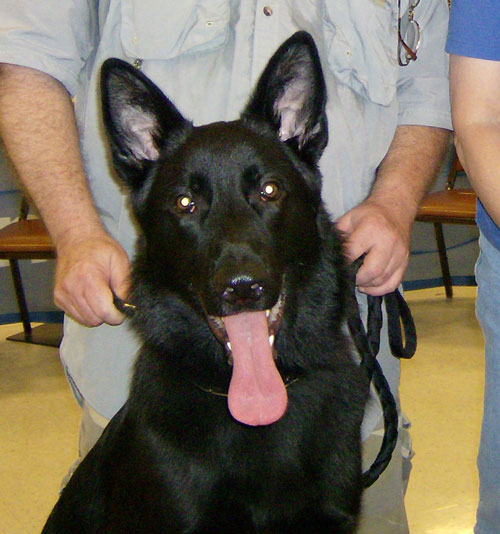 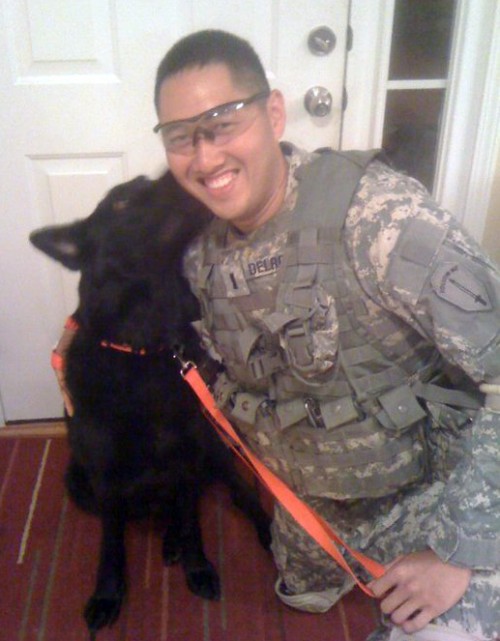 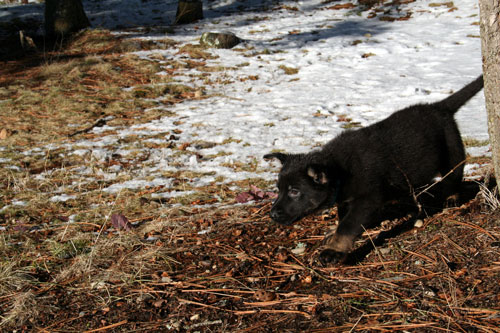 ” It’s now two days, and here are some of my observations…you were right, the dog is very, very, affectionate ( the most of all my dogs ). Solo has NO fear of any thing. No big white male lab, no sort of chuncky first born female lab, nor any 11 month old german german shepherd. No trees, no bushes, no fences, no noises, absolutely no fear of anything. He does do “the GS thing” which is, step back one step, and then observe, but no fear. ” Dan, 2-3-07 “Solo is everything I’ve always wanted in a dog”, Dan 2/28/2008 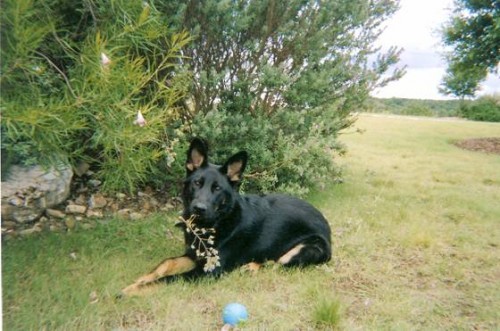 ” Well Elizabeth, all I can say is that I think this is the best puppy we’ve ever had. He goes out to the bathroom, he sleeps all night (this morning it was 8:30) we all overslept and he still did not want to get out of bed. Right now he’s in Tom’s arms in the recliner sleeping on his back. It’s pretty pathetic. He’s just the coolest dog. I’ve never seen Tom so in love with a dog before. I hope we don’t spoil him to bad. But, honestly, I cannot say anything negative about this puppy. What about the others?? And I can’t imagine anyone else having this dog but us. You did a great job….” Kim, 2-4-07 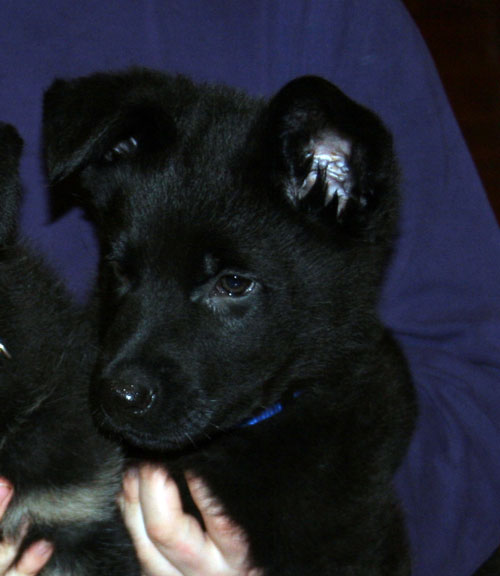 ” Nox is doing great. He already knows all his basic commands. Thank you so much for such a smart and loving dog.” Cameron, 3-2-2007 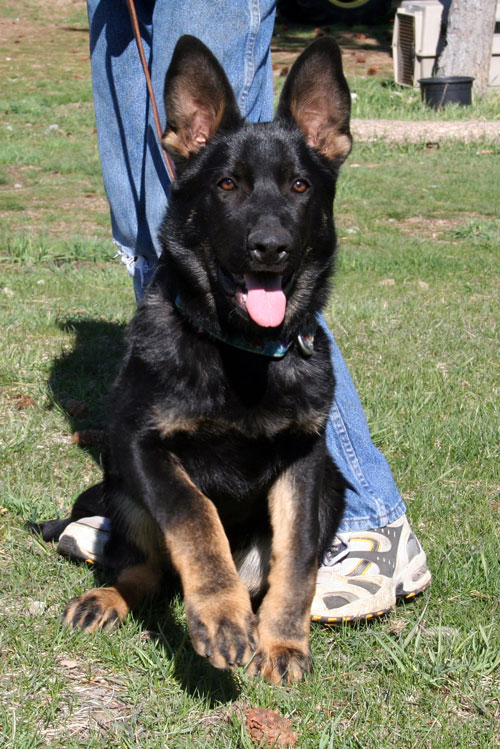 11/09/2007 O.K. I have not bragged in a while, so here goes. Hosso is doing awesome.  I have a funny story, I just hope I can relay it with clarity.  The other day my four older children were “wrestling” as kids often do.  Well, one of the kids went after Abby with a stick like object in hand.  Hosso leaped into action, grabbed the “weapon” out of Megan’s hand and pinned her to the ground in two seconds flat.  My kids were quite entertained and wanted to see if it was calculated or just coincidence.  So, they did it over and over, and Hosso reacted the same way each and every time.  It did not matter which child was bad guy or good guy, Hosso disarmed and flattened the attacker.  It was a riot.  I attempted to get a picture of the festivities, but Hosso is just to fast.” Laura 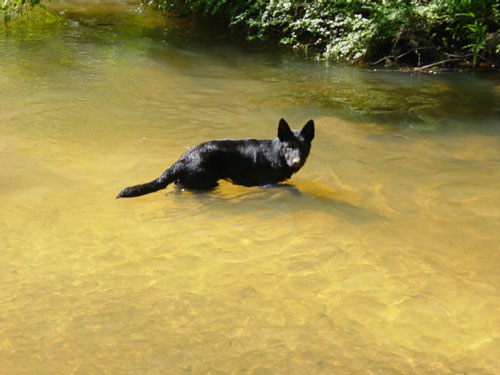 ” Wonderful! Thank you.  She’s playing fetch with a ball and just ate her first of many string cheese stick (parts) that my son threw from his high chair.  She’s sitting waiting for more, she’s no dummy!  Traveling didn’t scare her, you’d think she’s been here from birth.  She hasn’t been intimidated yet.  Anyway, thank you so much! She’s a real beauty.  And definitely, a well bred dog.” Connie, 2-12-2007 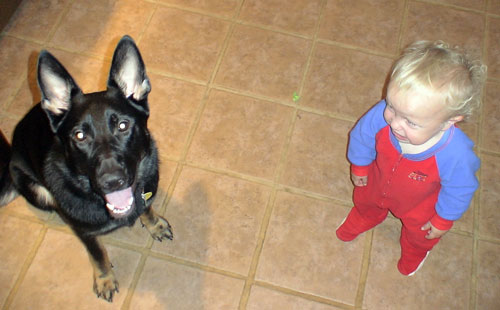 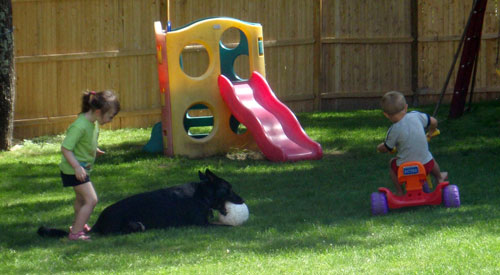 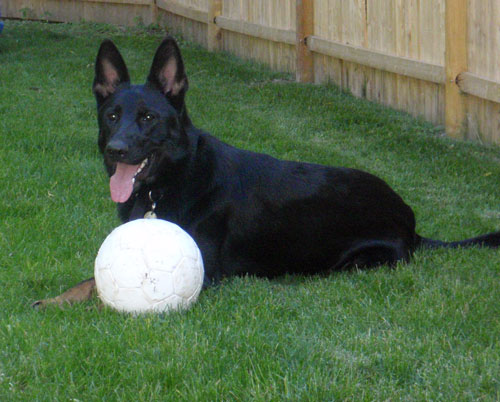 ” Lexi is doing great!  She only cried when we first put her in her cratelast night, but then slept through the night.  I put an afghan in with her, she loves it.  During the day when she’s not in the crate she pulls the afghan out and rests on it there, and last night I put on the noise maker that I bought for the baby but I figured Lexi needed it more.   It plays a heart beating.  Between the two things she really liked it better.  She’s going in and out on her own, so she’s liking it more today than yesterday.  She seems to really be getting comfortable here and is turning for her name now.  She’s got a number of toys that she has made her own, including Victoria’s slippers 😉  She’s really great!  We just absolutely love her.  Just wanted to let you know everything was going.  “

11/09/2007 ” I wanted to send you some recent pictures of Lexi so you could see how absolutely beautiful she is.  I know these aren’t the most “official” stances, but it shows how good she is with the kids.  If one won’t play ball she moves on to another.  The baby tries to sit on her “lap” which she tolerates amazingly well.  The picture of her with my oldest, you can see a little orange thing in her hand, that used to be a ball.  We have one of those ballpits for the little ones and she thinks it’s her never-ending supply of balls to throw and chew!  That seems to be one of our only “problems” with her, she thinks she one of the kids and feels like they have to share their toys with her too…I’m working on that.  She’s going through a little testing period right now.  I think it’s a pre-teen thing.  She also helps with the kids, if the baby cries, she licks him like crazy, which also helps clean his face, killing two birds with one stone.  She’s doing great though, just got spade and came through that with flying colors.  She liking the falling leaves and since they’re calling for flurries soon, I know she’s gonna love the snow! I hope all is well, Deena” 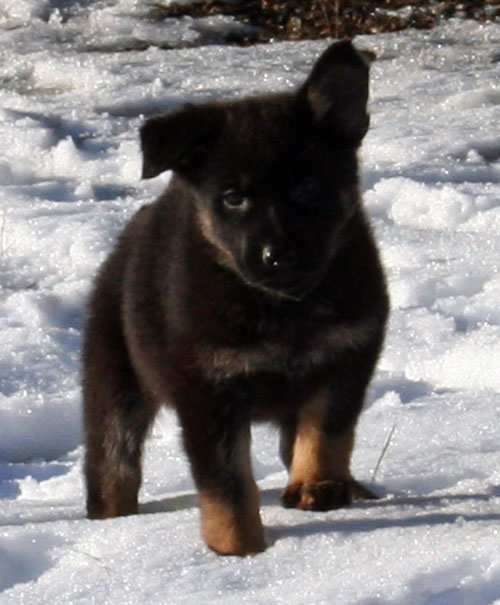 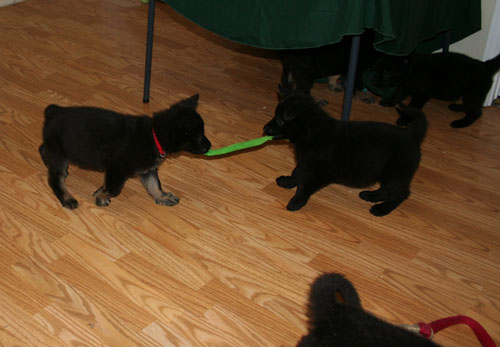 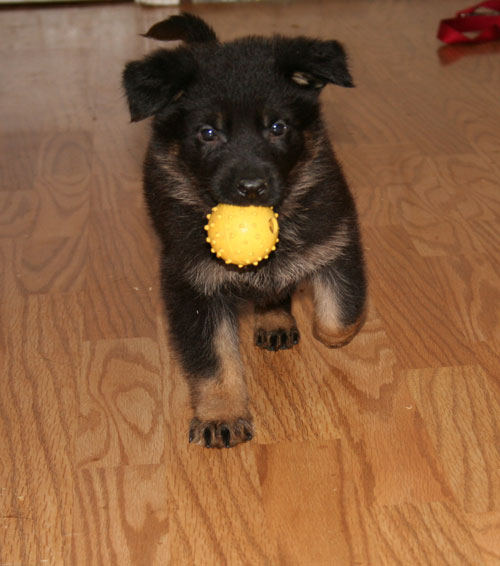 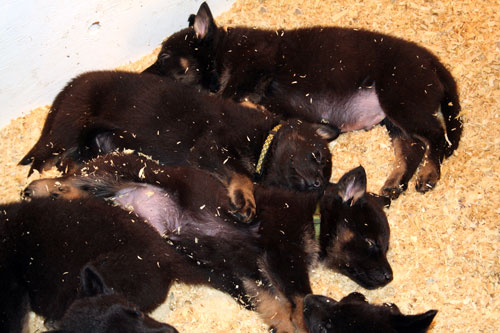