Whatever you thought you knew about dog’s sense of smell, this will blow your mind.  While researching for a Presentation on Search and Rescue Dogs, I came across this article. 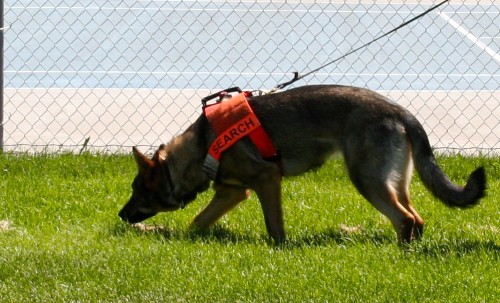 By Peter TysonPosted 10.04.12NOVA scienceNOW
What lies behind their exceptional gift of sniff?

They haven’t got no noses,
The fallen sons of Eve;
Even the smell of roses
Is not what they supposes;
But more than mind discloses
And more than men believe.
—from “The Song of the Quoodle,” G.K. Chesterton

My dog Jones used to do the most curious thing whenever my friend Burk visited my house. Jones was a mutt from the pound, so before we adopted him he might have picked up some unsavory habits. But he’d sidle over to Burk, rub up against him, and start to lift his leg on him.

Your average dog’s nose is tens of thousands of times as sensitive to odors as yours. What accounts for this stunning piece of machinery? Enlarge
Photo credit: © Image Source/Corbis
Jones, a greyhound-black lab mix who, bless his big heart, passed on at age 15 a few years ago, never did that with any other visitor. Burk didn’t smell or wear stinky clothes, and he didn’t antagonize or otherwise provoke Jones. Burk did have a dog of his own, a redbone coonhound named Hattie, but other visitors had dogs. In short, he shouldn’t have stood out in any way from anyone else. But to Jones, Burk was like a fresh wall to a graffiti artist.
Why? For me, Jones’s behavior—which even a dog-cognition expert acknowledged was unusual—epitomizes the mystery that is dogs’ sense of smell. What lies behind this astonishing capability of theirs, one that makes the world not a visual one as it is to us but a richly odoriferous one? How do their noses differ from ours, and what do their brains do differently? Finally, is there an answer to why Jones tried to pee on Burk every time he set foot in my place?
OLYMPIC SNIFFERS
Dogs’ sense of smell overpowers our own by orders of magnitude—it’s 10,000 to 100,000 times as acute, scientists say. “Let’s suppose they’re just 10,000 times better,” says James Walker, former director of the Sensory Research Institute at Florida State University, who, with several colleagues, came up with that jaw-dropping estimate during a rigorously designed, oft-cited study. “If you make the analogy to vision, what you and I can see at a third of a mile, a dog could see more than 3,000 miles away and still see as well.”

Figure 1: When a dog breathes in, the air separates into distinct paths, one (red) flowing into the olfactory area and the other (blue) passing through the pharynx (black) to the lungs. Enlarge
Photo credit: © Courtesy of Brent Craven
Put another way, dogs can detect some odors in parts per trillion. What does that mean in terms we might understand? Well, in her book Inside of a Dog, Alexandra Horowitz, a dog-cognition researcher at Barnard College, writes that while we might notice if our coffee has had a teaspoon of sugar added to it, a dog could detect a teaspoon of sugar in a million gallons of water, or two Olympic-sized pools worth. Another dog scientist likened their ability to catching a whiff of one rotten apple in two million barrels.
“I find it really astonishing that they’re able to detect such minute odor discriminations.”
Experts have reported incredible true stories about the acuteness of dogs’ sense of smell. There’s the drug-sniffing dog that “found” a plastic container packed with 35 pounds of marijuana submerged in gasoline within a gas tank. There’s the black lab stray from the streets of Seattle that can detect floating orca scat from up to a mile away across the choppy waters of Puget Sound. There’s the cancer-sniffing dog that “insisted” on melanoma in a spot on a patient’s skin that doctors had already pronounced cancer-free; a subsequent biopsy confirmed melanoma in a small fraction of the cells. And so on.
A NOSE FOR ODORS
What do dogs have that we don’t? For one thing, they possess up to 300 million olfactory receptors in their noses, compared to about six million in us. And the part of a dog’s brain that is devoted to analyzing smells is, proportionally speaking, 40 times greater than ours.
Dogs’ noses also function quite differently than our own. When we inhale, we smell and breathe through the same airways within our nose. When dogs inhale, a fold of tissue just inside their nostril helps to separate these two functions. “We found that when airflow enters the nose it splits into two different flow paths, one for olfaction and one for respiration,” says Brent Craven, a bioengineer at Pennsylvania State University who modeled airflow and odor transport using high-resolution MRI scans of a lab cadaver’s nose (see Figure 1). Craven and colleagues are working to reverse-engineer the canine nose, in part to aid in the design of artificial “noses” that can sniff out odors as well as man’s best friend can.

Figure 2: In the rear of a dog’s nose lies the olfactory region (yellowish-brown), with its scroll-like tissues bristling with smell receptors. Respiratory regions appear in pink. Enlarge
Photo credit: © Courtesy of Brent Craven
In us humans, the sense of smell is relegated to a small region on the roof of our nasal cavity, along the main airflow path. So the air we smell just goes in and out with the air we breathe. In dogs, about 12 percent of the inspired air, Craven’s team found, detours into a recessed area in the back of the nose that is dedicated to olfaction, while the rest of the incoming air sweeps past that nook and disappears down through the pharynx to the lungs. Within the recessed area, the odor-laden air filters through a labyrinth of scroll-like bony structures called turbinates (see Figure 2). Like a whale’s baleen sifting out krill, the turbinates sieve odor molecules based on different chemical properties. Olfactory receptors within the tissue that lines the turbinates, in turn, “recognize” these odor molecules by their shape and dispatch electrical signals to the brain for analysis.
EXIT STRATEGY
When we exhale through our nose, we send the spent air out the way it came in, forcing out any incoming odors. When dogs exhale, the spent air exits through the slits in the sides of their noses. The manner in which the exhaled air swirls out actually helps usher new odors into the dog’s nose. More importantly, it allows dogs to sniff more or less continuously. In a study done at the University of Oslo in Norway, a hunting dog holding its head high into the wind while in search of game sniffed in a continuous stream of air for up to 40 seconds, spanning at least 30 respiratory cycles.
“It is a really big issue as to how in the heck dogs are doing it.”
We can’t wiggle our nostrils independently. Dogs can. This, along with the fact that the so-called aerodynamic reach of each of their nostrils is smaller than the distance between the nostrils (see Figure 3), helps them to determine which nostril an odor arrived in. This aids them in locating the source of smells—we’ve all seen dogs on an interesting scent weave back and forth across its invisible trail.
A SECOND OLFACTORY SYSTEM
On top of all this, dogs have a second olfactory capability that we don’t have, made possible by an organ we don’t possess: the vomeronasal organ, also known as Jacobson’s organ. Located in the bottom of a dog’s nasal passage, Jacobson’s organ picks up pheromones, the chemicals unique to each animal species that advertise mating readiness and other sex-related details.

Figure 3: When a dog breathes in (far left), it can tell which nostril an odor arrived in because each nostril’s “aerodynamic reach” (blue) is so small. When a dog breathes out (near left), the expired air blows out the side slits in such a way as to augment the sampling of new odors. Enlarge
Photo credit: © Courtesy of Brent Craven
The pheromone molecules that the organ detects—and their analysis by the brain—do not get mixed up with odor molecules or their analysis, because the organ has its own nerves leading to a part of the brain devoted entirely to interpreting its signals. It’s as if Jacobson’s organ had its own dedicated computer server.
TRACK MASTERS
If dog’s basic smelling skills amaze us, what they manage to achieve with those skills is truly astounding.
Take tracking, for example. Deborah Wells and Peter Hepper of the Animal Behaviour Centre at Queen’s University Belfast, in Northern Ireland, showed in one study that dogs brought in at right angles to a trail recently walked by a person could determine the direction that person took from as few as five steps. In other words, the first step in the direction the person walked has a little less odor than subsequent steps, because its odor molecules have begun to diffuse into the air. “I find it really astonishing, kind of mind-boggling, that they’re able to detect such minute odor discriminations,” Horowitz says.
Scent-tracking dogs take such tracking to the extreme, routinely accomplishing remarkable feats in unfamiliar environments and on the trail of unfamiliar people such as missing persons. “It is a really big issue as to how in the heck dogs are doing it, that is, how they are tracking a so-called gradient,” Walker says. “They’re able to come to a branch point in the woods and say, ‘Okay, I think little Sally ran this way. Something happened, and I need to make a decision.’ That’s pretty amazing if you think about it from an engineering standpoint, because little Sally’s odors aren’t the only thing there. There’s changing wind, changing humidity. There are other odors—a deer defecated over here, and over here there’s some urine from a rabbit. And somehow that dog is able to say, ‘Yeah, but I’m focusing on little Sally.'”

As it moves along the ground, the bloodhound’s giant, flappy ears help fan up odors to its nose, one reason the breed is the superstar of scent-tracking. Enlarge
Photo credit: © Luis Santana/iStockphoto
OPEN QUESTIONS
Such mysteries are the spice for dog researchers. In a 2003 study, for instance, Wells and Hepper found that dogs led at right angles to a human-laid trail one hour after the trail was walked identified the correct direction of those trails that had been laid from left to right more frequently than those laid from right to left.
“The dog has distinguished you.”
“This was an interesting result, and I’m not too sure what is going on here,” Wells told me in an email. “It is possibly related to lateral bias—we know that dogs show strong motor preferences, with male dogs using their left paws more than female dogs, who, by contrast, tend to use their right paws more.” Some studies on other species show that lateral biases can extend to the olfactory system, she says, and further research is in order with dogs.
A MARKED MAN
And what of Jones and my friend Burk? When I told Horowitz about my dog’s behavior—which always caught me and Burk equally off guard—and I asked why Jones might have done it, she laughed and said, “I cannot tell you. There are some places my science does not go.” She could theorize, she said: Dogs mark with urine at places they think a lot of other dogs are going to smell, or maybe because there’s something desirable or interesting about that place. Perhaps Burk already smelled pretty fragrantly of something else, she offered.
Regardless of why, I said, Burk should have felt honored by such treatment, right? Horowitz laughed again. “He certainly shouldn’t have seen it as an insult,” she said. “The dog has distinguished you.”
Peter Tyson is former editor in chief of NOVA Online.”