Some irrefutable rules of puppy socialization

One doesn’t have to be in the sport of dogs for very long before one’s canine population starts to multiply. Almost everyone starts out with just one dog that frequently gets relegated to “beloved pet” status in the endless quest for super performer, fabulous stud dog, outstanding dam, consummate show dog, etc. Even though a lot has been written in the last twenty years about socializing puppies, the more dogs one acquires, the more one tends to ignore this aspect of puppy raising. The amazing part is that it doesn’t take a whole lot of time and energy to develop a self-confident, well-rounded puppy, but the first 4½ months of life are absolutely critical.  Since Goldens and Eskies are so versatile, it’s probably even more important to have a dog that is capable of doing everything-obedience, conformation, and agility.  “A puppy who has had no socialization before 16 weeks of age has little chance of becoming the sort of dog that any one of us would want as a companion.”1

One of the reasons so many people are insistent on the 49th day rule of puppy acquisition is that after 7 weeks of age, puppies become involved in a dominance hierarchy (pecking order). The puppies in the middle of the pack fare the best; the dominant ones are usually too headstrong and stubborn and fight their owners (since they know they are the leader of the pack) their entire lives. The ones at the bottom of the heap tend to slink around, have a lot of irritating behaviors (such as submissive urination) and generally lack confidence in new situations. If you must raise littermates together, either crate and kennel them separately or if you have to double up, mix the pairs each day. When the different puppies are rotated together they can’t establish much of a dominance order. They have to keep re-establishing a dominance pattern and it throws them off balance.

among littermates, dominance is established before they are 16 weeks of age. “There is intense competition in a puppy litter for dominance between 11 and 15 weeks of age.”2 This is so compelling that according to Dr. Pfaffenberger, Dr. Paul Scott at Hamilton Station was never “able to raise more than three wire fox terriers together to adulthood.”3 The other puppies are either killed outright by their siblings, kept away from food (which was always available in the run) or forced to sleep outside the kennel in the freezing cold!

It may look cute to raise a puppy and mother together but after awhile the dam starts thinking it is not so cute. In many subtle ways she starts rejecting the puppy. It may not be very noticeable to humans but the puppy starts feeling a sort of limbo existence-attached to the mother but rejected by the mother who is wondering why the puppy won’t find its own pack. Once again, separate kenneling is the answer. “I cannot remember a single dog who was raised with her mother to adulthood who could be successfully trained for a Guide Dog. Where two littermates are raised together in the same home we have had the same results.”4 Raising a puppy with an older dog is dangerous both physically and mentally.  A large dog playing with a 3 month old puppy is asking for shoulder and joint problems. Some shoulder injuries are permanent and can certainly ruin a promising dog’s show, obedience or agility career. Once again subtle dominance factors come into play. It is frequently difficult for a male puppy raised with an older and intact male dog of the same breed to develop enough attitude to carry him into the specials ring.

Get the puppy off the premises. The amazing part is you only have to do it for 20 minutes a week. For 20 minutes one time a week, take your puppy to some bizarre, crowded, noisy place: flea market, match, little league game, soccer game, car repair shop, shopping malls, etc. A trip once a month to the vet’s office doesn’t count. A puppy can be king of the mountain at home and a coward the minute it steps onto unfamiliar territory. 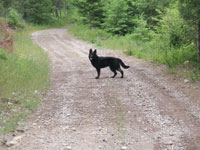 All of the above is critical before the first 5 months. You will frequently hear claims from people that their breed is different, more immature, etc. However, after studying puppies of many different breeds, Dr. Clarence Pfaffenberger (based on Dr. Paul Scott’s research) maintains “. . . that as much as breeds vary, the critical periods apply equally to all breeds, and what happens during the critical periods is just as important to one breed as it is to another.”5 Under the age of 16 weeks the puppy can still be socialized to human beings. Unfortunately, the converse does not hold true. If the puppy was not socialized at all the first 16 weeks, trying to make up for lost time with a 6-month old or older puppy is virtually impossible. And obviously, the more one socializes a puppy, the better and smarter a companion it will be. Although 20 minutes a week will suffice, think what a great puppy you would have if it went everywhere you went. Also, keep in mind that socializing the puppy should always be on an individual basis. Taking the puppy to new places always accompanied by a companion (even a same age puppy of another breed) totally defeats the purpose and makes the puppy even more dependent on other dogs.

A lot of breeders and vets recommend puppies must have a certain number of vaccinations before they should be exposed to other canines. Unfortunately, if you wait around for vaccines to override the maternal antibodies, you could be waiting for as long as 6 months. Although there is some element of risk, in most cases the puppies will either still have some maternal antibody protection or will only be in contact with other dogs that are up-to-date on all their shots (such as puppy kindergarten). 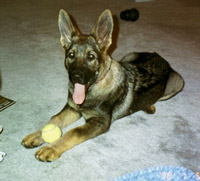 If you can get your puppy into a local puppy kindergarten, do so! The puppy kindergartens that follow the Sirius Dog Training method developed by Ian Dunbar or use only motivational methods are great. Even conformation prospects benefit greatly from puppy kindergartens. They learn to interact with other dogs, respond to their owner and generally have a wonderful time. It is also amazing how much they learn and retain at an early age. Early (and gentle) training ensures a dog that will be capable of learning its entire life. If there isn’t a puppy kindergarten class in your area, you might want to consider starting one.

Raising your puppy as an only dog

For the first 4 months, think of raising a young puppy as through it were an only dog. Yes, your older dogs may be a little ignored for a couple of months or may even have their nose out of joint a little but it is a very temporary situation. Plus they probably had your undivided attention when they were puppies. After the puppy is 5 months old, you can put it back with its littermates, mother, older dogs, etc. By 5 months of age its attachment to humans will be well-cemented and the danger of it becoming totally dependent on other dogs is gone. And now that the puppy has bonded to humans and been exposed to new situations, you can give the older dogs extra attention. 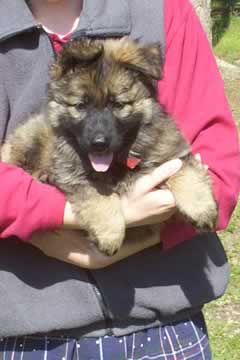 Above are the irrefutable rules of puppy raising. The information gleaned from Dr. Scott’s studies has actually helped children in orphanages-infants need socialization also. Puppy socialization is not very complicated or even very time consuming but attention during the critical period is imperative. You could socialize a puppy wonderfully until the age of 5 months, then stick it in a run and never physically touch it for a year. After a year, with a minimal amount of effort you would still end up with a normal dog. However, if there is lack of human attention in the first 4½ months, no amount of socialization, attention, etc. can redeem the  puppy. “The third critical period, from 49 to 84 days of age (i.e. 7 to 12 weeks), . . . found to be the best time to form the man-dog relationships, and an attachment by the puppy which will permanently affect the attitude of the dog to human beings and his acceptance of direction and education.”6 The well-socialized puppy becomes the adult that is bold in the agility ring, confident in the obedience ring, and animated in the conformation ring. With today’s high level of competition in all the breeds, it’s hard to win with anything less. End Notes

2 Ibid ., . 130. Much of Clarence Pfaffenberger’s conclusions and research is based on the research conducted by Dr. J.P. Scott at the Roscoe B. Jackson Memorial Laboratory in Bar Harbor, Maine.