The Boone and Kelly puppies are a litter that had been planned for several years and so far they have met our every expectation.  Like their parents they are both beautiful and with a pleasing temperament.  They went home just a little over a week ago. 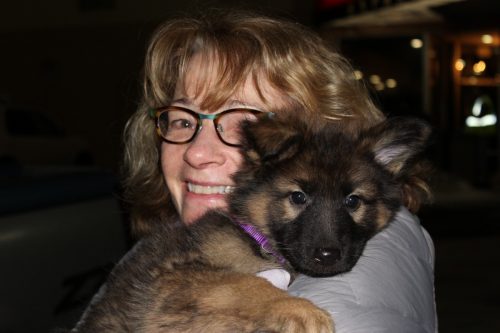 This pup’s owner flew all the way from Ohio to pick up her pup so that the pup could fly back on her lap (or under the seat in front of her) in the airplane.  The plan is for this pup to work as a Therapy Dog.  Here is what Diane writes, “Nayla is just incredibly sweet! She is letting the cat come up and sniff her nose while holding perfectly still and staying calm! I love her so much! 9 weeks old and just doing so well! She is consistent with “sit” and she’s getting good at “come”. She is so calm and sweet—I am in puppy love!”

At the airport, they met another pup, whose owners had also flown in to pick him  up. 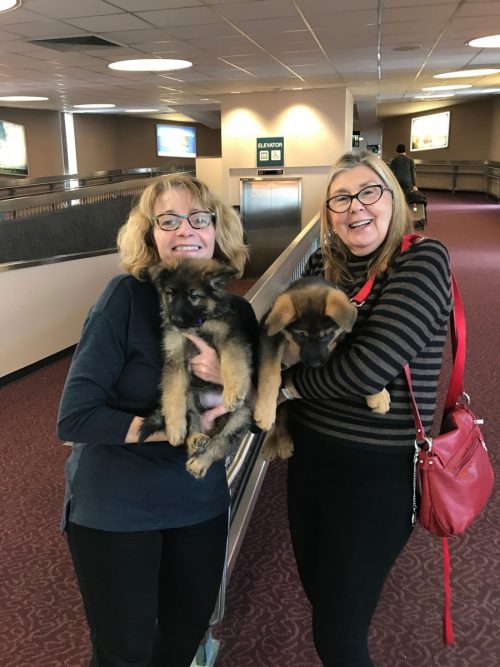 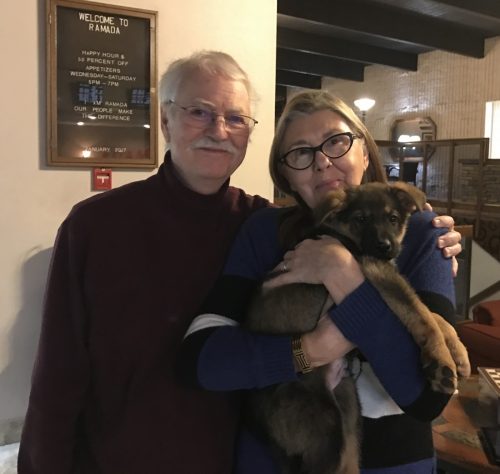 They write, “We are in love with Rosco!
It was great to meet you and your husband in person – I’m only sorry that we didn’t have more time together.
Rosco was terrific in the Airport and on the plane where he had many people laughing and taking his picture and petting. We also met his sister in the airport.
Thanks again.” 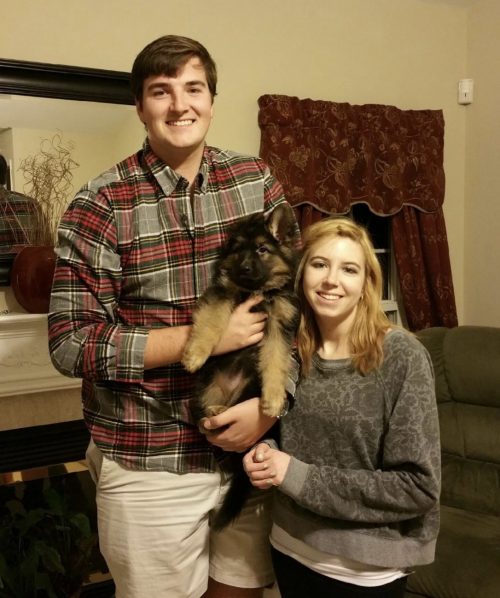 This next puppy is a long coated female who went to South Carolina,

“We are very, very happy with her and she is exactly what we were expecting! No surprises at all. She is a balanced and social girl and is a great addition to our family. Exactly what we wanted!

We couldn’t be happier with her!” 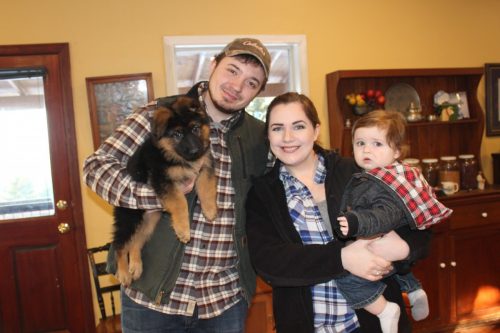 The black and red long coated male went to this dear family. 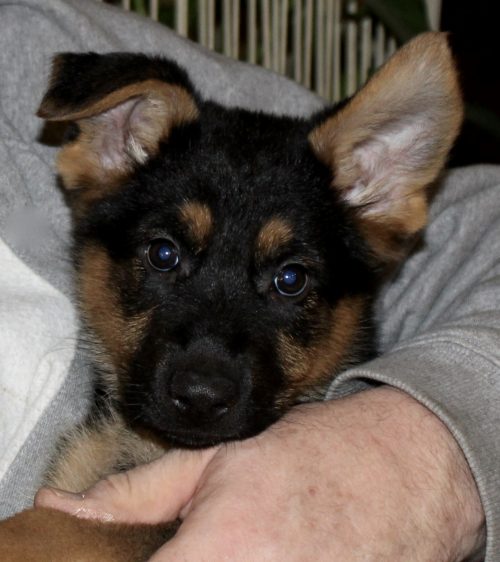 Here is Diamond, the standard coated black and red female that we kept. 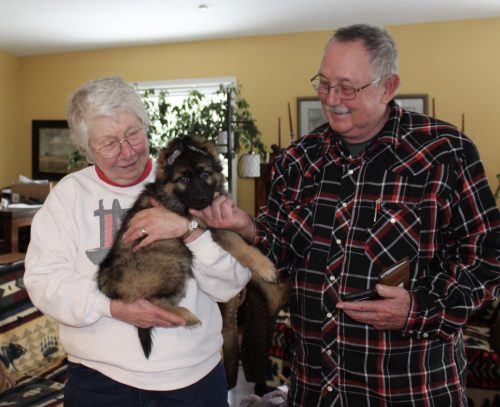 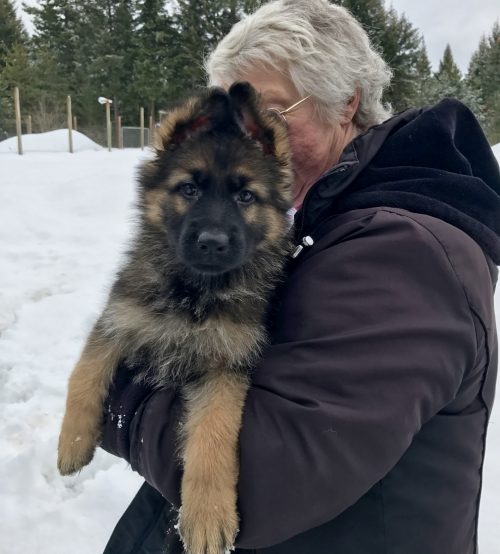 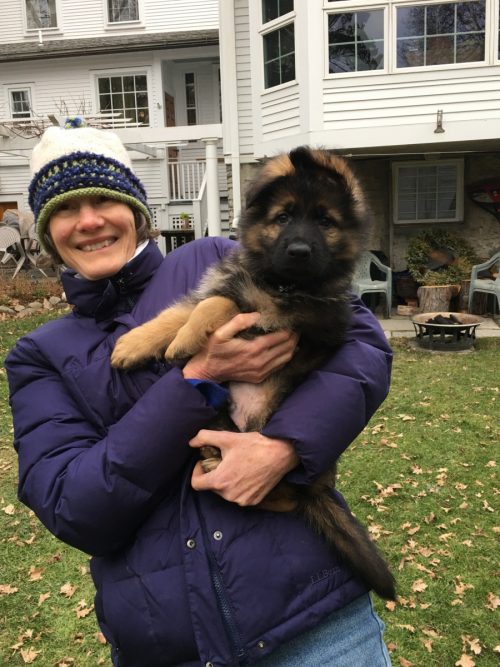 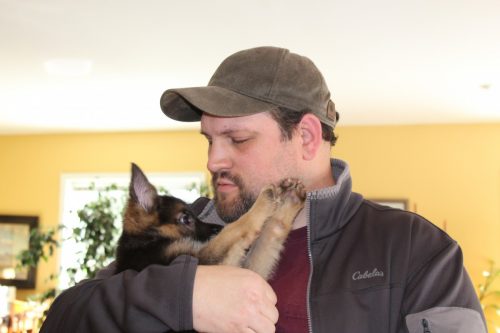 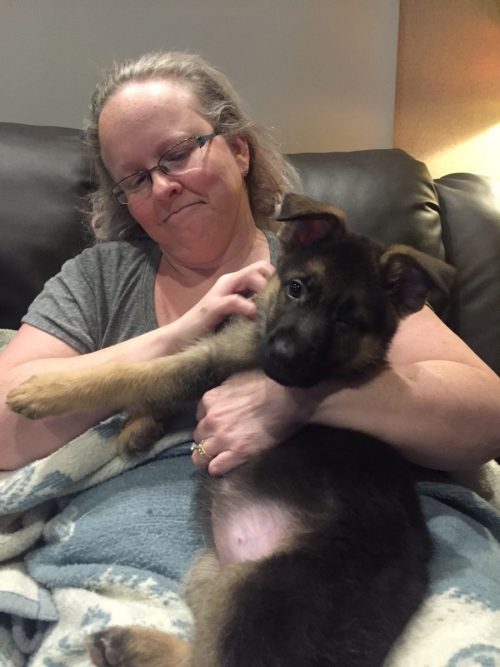 This sweet little girl has a big job ahead of her, both as service dog and protector,

“I know she is going to be an amazing dog unlike any I have ever had. Obviously it won’t make sense for me to email you about everything she does that amazes me, or else I would be emailing you daily and you would probably have to start filtering me out as spam.

That being said I wanted to share with you some of the things that I have already found jaw-droping, as a first time GSD owner. First of all the drive from there to here, door-to-door, was just shy of 1175 miles. With stops that means we were on the road for almost 20 hours (over two days). She laid down and slept in the crate the entire time. I would stop every two hours to give her a potty break, and every so many times we would have a food break, or a play break, but as soon as I put her in her crate she would either lay down calmly or sleep. Probably less then 15 mins of whimpering over the entire 20 hours of driving. She wouldn’t even cry when I left the car to get a bite to eat, or fill up with fuel. She didn’t have one accident or throw up in the car either, and the one night we stayed in a hotel she slept in her crate without a problem or any whining.

Today for the first time she went to the door and cried, it was about 30 minutes before she was scheduled to go potty but I took her out and sure enough she went to the bathroom. When I take her out to her potty spot she goes pee, if she is done she comes back and sits at my feet to let me know she is done. If she has to poop as well then after peeing she will walk around and smell and find a spot for that business and then once done with that will come back to my feet and sit perfectly still to show me she is done.

Obviously I could go on and one with all of the little things we have already learned about her but those are probably the ones that amazed me the most. She will definitely be a massive part of our life, and I will continue to keep you posted on her progress. Deseray is already saying that our next dog MUST be a GSD as well 🙂

Thanks for everything you do that goes into producing such a magnificent dog.” 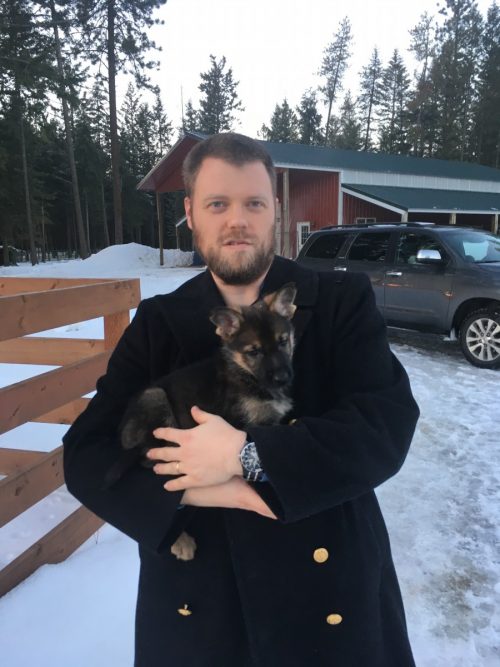 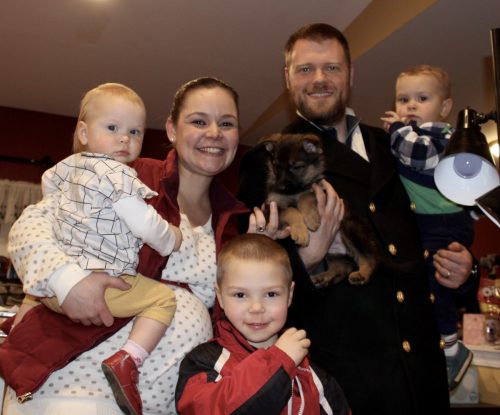 The littlest pup, the sable female, went to the biggest family.  In the family picture, she was just six weeks old, and eight weeks when picked up by the dad in the top photo. 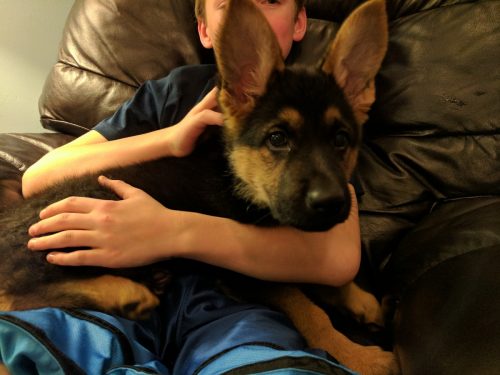 Finally, we have this handsome standard coated black and red female.  Her puppy family writes that Silke is that whip smart, family friendly, affectionate dog, that so many people are looking for.

“This sweet, sweet girl sits, comes when called, quickly learns family names, and (in winter weather) goes back to the door to let us know she’s finished going potty.
Probably Silke’s most endearing quality is that she watches and waits. She’s never compulsive, but sits and observes in new situations, or say, meeting other dogs or people.
Her name (pronounced Zilkah) means “Heavenly”, which fits her perfectly.
Candle Hill is committed to breeding healthy dogs with excellent temperament, but in Silke, we feel they have produced their Magnum opus!
She is wonderful with our children, and we had no worries about how she would respond to our younger grandchildren.
Because Silke watched the cats for days, but never chased them, (but, she’s still on a leash at all times when outside) the cats met her one night at the door and touched noses with her. High praise from a cat, to be sure!! ?”